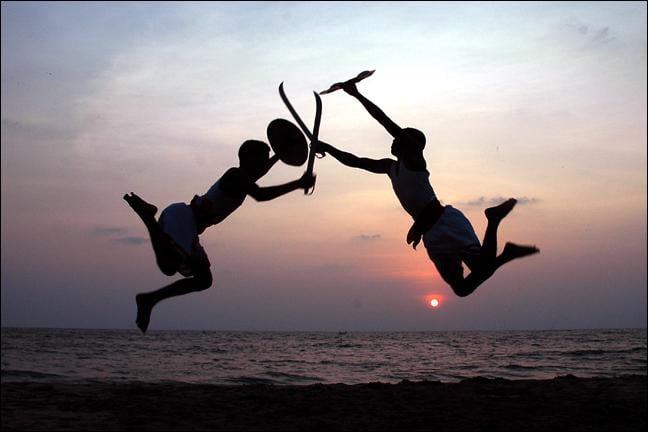 Yes, martial arts also have the signature of Agastya on it.

The moment we talk about martial arts, the thought of Kung Fu, Karate, or the more recently popular Tai Chi comes to mind. But much older than all these martial art forms, are the ones that were developed in India. And of course, they were developed by none other than Sage Agastya himself!

Two of the oldest continuously practiced martial arts in India are the Kalarippayattu and Silambam.

This ancient system is again personal to me since I come from a tradition of Kalaripayattu myself. I am a fifth-generation martial artist. My great grandfather Krishna was an extraordinary exponent of ‘Choodani Viral Marma Vidya’ , a technique used to immobilize the opponent with yogic powers, by simply pointing a forefinger.  My father is the legendary Kalari master and Siddha expert Sanal Kumar Gurukkal. We follow the Thekkan Kalari which is said to have originated through Agastya. The credit for developing the northern style called vadakkan Kalari is given to Parashurama.

What is Kalaripayattu? The word Kalari means battlefield and payattu means training.  It was a martial arts form designed to be used on the battlefield. However, its nature is that it lends itself to different areas of life, including self-defense, mind control, health, and wellbeing to name a few.

Since it is originally designed for use on the battlefield, Kalaripayattu employs weapons as well as hand-to-hand combat. Students go through the initial training of different combat techniques before they are trained to spar with partners. Kalaripayattu uses different types of weapons including swords, sticks, and Urumi. Urumi is one of the weapons that are unique to India. It is a long, flexible, and slender weapon.

What sets these martial art forms apart is the inherent devotional vein. Nothing that comes from ancient India is devoid of divinity, or some form of spirituality. We must remember that nothing in life is ever apart from spirituality, even if we modern folk have forgotten that!

Another feature of the martial arts forms that makes them very unique is that the students are trained to pinpoint the vital points in the body, known as the ‘marmam’ points.  The ancient sage Sushruta had identified 107 vital points in the human body. Of these 64 are considered lethal if struck at the exact point.

Kalaripayattu training is not confined to martial arts alone. Massages are often given to students learning this martial art form to increase flexibility and treat muscular injuries.