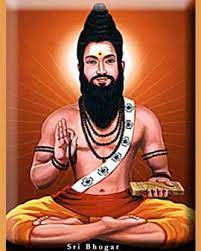 Bhogar initiated many far and wide into the Kriya Kundalini yoga. He wrote about traveling through the sky and using other mystic methods to reach faraway places. He wrote about going to China in his own aircraft and meeting with Chinese Sidhars. In South America, it is recorded that Bocha, who gave laws to Maycar, was a white-bearded man, wearing long robes, who regulated the calendar, established festivals, and vanished in time like others.

Confucius is said to have met Bhog Yang in the 5th century. He notes: I know birds fly, fish swim and animals run. But a dragon that rises up in the air and flies is beyond me. Today I met LaoTzu. He is equivalent to a dragon.

In many parts of India, we have records of Bhogar. He visited Kamakhya temple in Assam and Bodhgaya and Kathirkamam in Sri Lanka. In Arabia, he was known as Yusuf. At Kailasa, he wrote Sapta Kandam. Back in Palani, he introduced Chinese soda and ceramics to Tamil Nadu. At the ashram in Kutralam, he handed over his composition of Bhogar 7000 to Agasthyar.

Bhogar advised the Panchamrutha abhisheka on the Navapashana idol. The Navapashana idol making was an arduous task. 81 Upa Siddhas or juniors worked with him led by Pulipaani. Each poison required a team of 9 and thus totally 81 for the mixture of 9.

He explains Kayakalpa treatment with a story.

Bhogar started a journey with three disciples and his dog. They carried Kayakalpam created with 35 rare medicines. First Bhogar gave the medicine to the dog. It died immediately. Next, he gave it to his disciple Yu or Pulipaani. He too fell down and died. The other disciples were shocked. They didn’t accept the medicine. Then Bhogar took it himself and fell down. The other disciples ran away crying in search of support to conduct the funerals. When they returned with people, they didn’t find any of the bodies. Instead, there was a note from Bhogar: Kayakalpa worked. When we came out of the Turiya state, we were rejuvenated as youngsters. You lost your chance to immortality.

According to Sidhar Paadal, Bhogar lived with youthful energy for 12000 years. In the Bhogar Jnanasutra, verse 410 of Chapter 8, he says, “I prepared patiently through penance the Kayakalpa. I didn’t listen to the fools and skeptics who don’t know the secrets. I lived in the land of foreigners for 12000 years with full vigor. I attained a golden color and now live in a golden world.”

When his guru Kalainginathar was ready for Samadhi, he telepathically invited Bhogar to China. Bhogar took the sea route. Kalainginathar transferred his knowledge in alchemy and Jnanayoga to Bhogar. Using transmigration, he entered the body of a Chinese man and started spreading Sidhar tradition under the name BhoYang. Bho means blessing and happiness. Bhogar states that Kundalini is the root energy of the human body. He explained that the feminine Ying energy that is stored in the Muladhara chakra can rise to the masculine Yang of Sahasrara and their union leads to Ananda.

According to Taoism, while crossing over to India, the sentry at the Hanku mountain pass asked LaoTzu or BhoYang to be enlightened. LaoTzu composed two great works there. 37 slokas in Taoching and 42 in Teching. The idea of immortality that is embedded in the Tamil Sivayoga system can be seen in Tao yoga teachings.

It is said that Bhogar was involved in the construction of the Thanjavur Brihadeeswara temple. He gave engineering support to haul the 18-tonne stones to the top of the pagoda. Bhogar used his disciple Karuvoor Sidhar. A five-mile-long ramp was used. We can still see a spot for Karuvoor sidhar in this temple.

Bhogar was a master of Sidha treatment, alchemy, knowledge systems, Kayakalpa, yoga, and dhanur sastra. He remains immortal in Nirvikalpa samadhi as a Sidha who transformed poisons into medicines, transmigrated into other bodies, travelled the world as Bhogar, Bhoganathar, or Bhogyang, and as the creator of Palani Muruga.